This project aims to understand the relative contributions of contact area, force, and moisture of the finger in the interaction between a finger-pad and a physical surface. The proposed apparatus shown to the right measures all three phenomena simultaneously using a camera system, a force/torque sensor, and a transparent moisture sensor.

The interaction between a human finger-pad and a physical surface generates not only the tangential friction needed for gripping objects but also a wide variety of perceptual experiences. Finger-surface contact behavior is known to depend on the actual contact area, the normal force with which the finger and the surface are pressed together, and the presence of liquids (such as sweat) at the interface; however, the relative contributions of these phenomena are not fully understood, nor are their interactions.

Let's think about a situation in which you are trying to pull a plastic credit card from your wallet. When your finger is dry, you may want to press on the card more to increase frictional force and prevent slip. On the other hand, less pressing force is required if your fingerpad is moist, as this moisture creates additional friction.

To investigate this problem, we are preparing a system that can simultaneously measure all three quantites (contact area, force and moisture) over time with high resolution and frame rate. We plan to conduct experiments wherein a human subject presses his or her finger on the transparent surface at the middle of the apparatus. A light illuminates the contact from below the surface, so that a camera located there can record the contact area. A force/torque sensor mounted above the surface measures the normal and tangential forces exerted by the subject. The quantity of liquid on the fingerpad is measured by a custom transparent moisture sensor that is embedded in the transparent surface at the point of fingertip contact.

By analyzing the relative contributions of the three factors, we aim to deepen our understanding of the physical phenomena that affect human manipulation and perception through the hands. 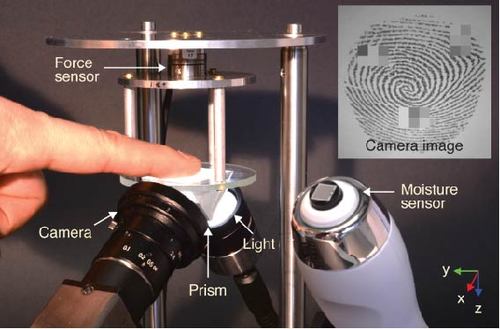 Frontiers in Neuroscience, 14(235):1-14, April 2020 (article)
Abstract
One may notice a relatively wide range of tactile sensations even when touching the same hard, flat surface in similar ways. Little is known about the reasons for this variability, so we decided to investigate how the perceptual intensity of light stickiness relates to the physical interaction between the skin and the surface. We conducted a psychophysical experiment in which nine participants actively pressed their finger on a flat glass plate with a normal force close to 1.5 N and detached it after a few seconds. A custom-designed apparatus recorded the contact force vector and the finger contact area during each interaction as well as pre- and post-trial finger moisture. After detaching their finger, participants judged the stickiness of the glass using a nine-point scale. We explored how sixteen physical variables derived from the recorded data correlate with each other and with the stickiness judgments of each participant. These analyses indicate that stickiness perception mainly depends on the pre-detachment pressing duration, the time taken for the finger to detach, and the impulse in the normal direction after the normal force changes sign; finger-surface adhesion seems to build with pressing time, causing a larger normal impulse during detachment and thus a more intense stickiness sensation. We additionally found a strong between-subjects correlation between maximum real contact area and peak pull-off force, as well as between finger moisture and impulse. 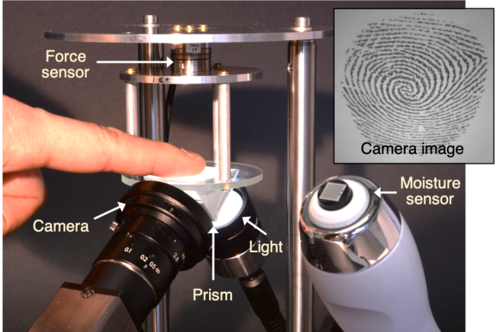 Understanding the Pull-off Force of the Human Fingerpad

Work-in-progress paper (2 pages) presented at the IEEE World Haptics Conference (WHC), Tokyo, Japan, July 2019 (misc)
Abstract
To understand the adhesive force that occurs when a finger pulls off of a smooth surface, we built an apparatus to measure the fingerpad’s moisture, normal force, and real contact area over time during interactions with a glass plate. We recorded a total of 450 trials (45 interactions by each of ten human subjects), capturing a wide range of values across the aforementioned variables. The experimental results showed that the pull-off force increases with larger finger contact area and faster detachment rate. Additionally, moisture generally increases the contact area of the finger, but too much moisture can restrict the increase in the pull-off force.