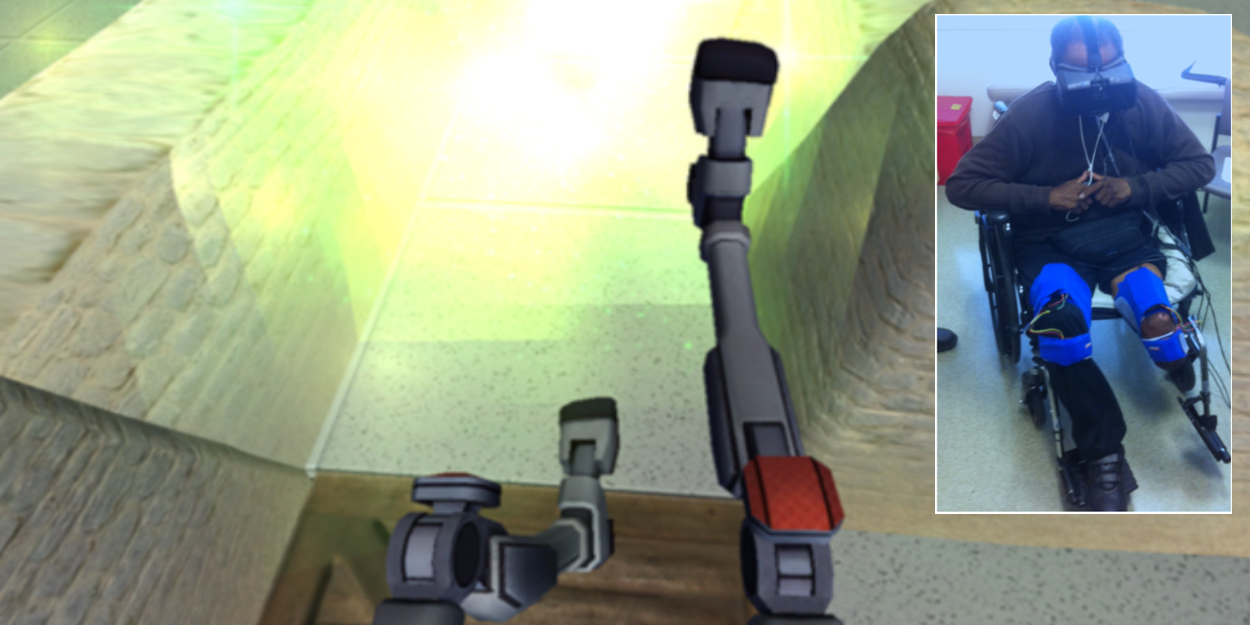 The right inset shows a lower-limb amputee using an early version of the created system. He wears an immersive VR headset and motion-tracking sensors on the upper and lower segments of both legs. The larger image shows his view of the virtual world, including the game scene and two intact legs that track the motions of his real legs.

Up to 90% of individuals who undergo amputation experience a persistent sensation of the missing limb, which is called a phantom limb  A substantial subset of these people feel intense pain in the missing extremity; this phantom limb pain (PLP) often responds poorly to medications or other interventions and significantly interferes with quality of life.  There is an urgent need for better treatments for PLP, particularly for people with lower-limb amputation.

Other researchers have published a small number of studies showing that virtual reality (VR) can alleviate phantom limb pain for some people, but the strength of the effect varies greatly, and some people show no response.  The research objective of this project is to test the hypothesis that limitations in the verisimilitude of the sensory feedback provided by current PLP therapies limit their efficacy.

Specifically we aim to determine whether PLP after leg amputation is reduced by high-quality, multi-modal feedback provided through immersive VR technology that tracks the participant's real leg motions and shows him or her a pair of intact legs moving in the same way.  Immersive games that require a large range of leg motions add to the engagement and long-term interest of such a treatment option.

Pilot data collected from two individuals with PLP using an early version of this system strongly support the hypothesis in question [ ].  After improving the system's hardware and software, we are now conducting a proof-of-concept study to serve as the next step in the translational pipeline.

This study is being conducted in Philadelphia, USA, and this project is funded by an NIH R21 grant to H. Branch Coslett.