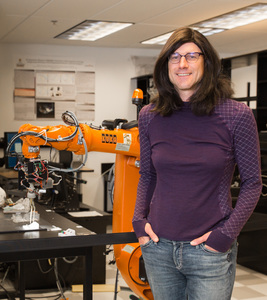 As part of a proposed design for a surgical robot on the space station, my research group has been asked to look at controls that can provide literally surgical precision. Due to excessive time delay, we envision a system with a local model being controlled by a surgeon while the remote system on the space station follows along in a safe manner. Two of the major design considerations that come into play for the low-level feedback loops on the remote side are 1) the harmonic drives in a robot will cause excessive vibrations in a micro-gravity environment unless active damping strategies are employed and 2) when interacting with a human tissue environment the robot must apply smooth control signals that result in precise positions and forces. Thus, we envision intelligent strategies that utilize nonlinear, adaptive, neural-network, and/or fuzzy control theory as the most suitable. However, space agencies, or their engineering sub-contractors, typically provide gain and phase margin characteristics as requirements to the engineers involved in a control system design, which are normally associated with PID or other traditional linear control schemes. We are currently endeavouring to create intelligent controls that have guaranteed gain and phase margins using the Cerebellar Model Articulation Controller.

Biography: Chris has worked at the University of Calgary since 2001. Chris earned a BEng in Engineering Physics (1993) from the Royal Military College of Canada and a PhD from the University of Toronto Institute for Aerospace Studies (1999) investigating control of flexible-joint space robots using neural networks. While living in Toronto, Chris worked as a control systems designer for Dynacon Enterprises, working as part of a team that developed and tested a control system for an antenna on the space station. Chris also worked for CRS Robotics, programming robot movements. Chris is a Professional Engineer registered in the province of Alberta. Chris teaches a wide variety of types of undergraduate courses, which over the years have included Control Systems, Engineering Design, Engineering Professional Skills, Roles and Responsibilities of the Professional Engineer, and Technology and Society. Chris enjoys research in aerospace and control systems. Chris likes cycling to work on the beautiful Calgary bike paths and goes to the mountains frequently, hiking in the summer and skiing in the winter.