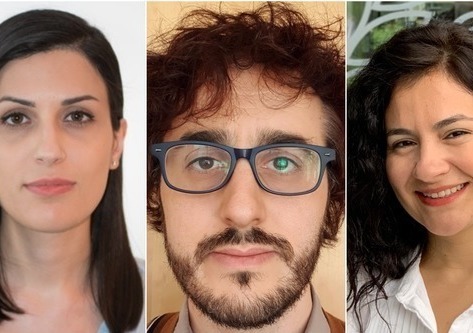 The researchers from Katherine Kuchenbecker's Haptic Intelligence Department see their time at the MPI-IS as a valuable springboard for the next step in their academic careers.

Hasti Seifi, Ad Spiers, and Yasemin Vardar are set to take up their new positions in the coming month.

In the course of a scientific career, postdoctoral research positions present young scientists with an opportunity to explore new areas of research and start planning the next chapter, which is often a faculty position at a university. To help them get there, senior scientists can provide invaluable support. As the career trajectories of the postdocs in the Haptic Intelligence Department at MPI-IS have shown, Katherine Kuchenbecker’s approach to mentoring has proven particularly effective. To date, all six postdoctoral researchers who have left the MPI-IS Managing Director’s department have moved on to independent scientific positions at leading institutions in Europe and around the world.

Most recently, Hasti Seifi, Adam (Ad) Spiers, and Yasemin Vardar accepted faculty positions at top European universities, where they will take up their work in the coming months. “I am very proud of Hasti, Ad, and Yasemin for having the drive to push their careers as independent scientists forward,” says Katherine. “During their time at MPI-IS, each of them developed their own unique scientific vision, and their appointments to tenure-track faculty positions illustrate their potential to become leaders in their fields.”

Hasti Seifi came to MPI-IS as a postdoctoral researcher in 2017 after completing her PhD at the University of British Columbia in Canada. During her time in the Haptic Intelligence Department, she led the creation of Haptipedia, an online taxonomy database and visualization of haptic devices. She is also involved in a research project that aims to detect novice surgeons’ motion inefficiencies in laparoscopic surgery, and she is analyzing data from robot touch sensors to improve social interactions between robots and various people, including children with autism.

After receiving several offers from institutions around the world, Seifi decided to accept an offer for a tenure-track assistant professorship at the University of Copenhagen in Denmark. On September 1, she will join the Human-Centered Computing section of the university’s Department of Computer Science. “Katherine not only gave me lots of tips throughout the application process, but she was also available to answer my questions when it came to choosing which position I would accept. By sharing her own experience with me, she really helped me figure out what I wanted,” says Seifi.

Ad Spiers has accepted an appointment as Lecturer in Robotics and Machine Learning in the Department of Electrical and Electronic Engineering at Imperial College London in England. As a senior research scientist at MPI-IS, his research focused on developing novel tactile sensors as well as touch-sensitive robot hands that can move objects around in their grasp to increase the haptic information acquired from those objects. He also worked on developing shape-changing haptic interfaces to provide navigation assistance to pedestrians.

“Katherine and I have a lot of crossover in our research interests, and talking to her about what I wanted to do with my career was helpful from the very start,” says Spiers, who joined MPI-IS in 2018 after working as an associate research scientist at Yale University in the USA. “When I told her I wanted to apply for faculty positions, she gave me valuable tips on how to write an effective research statement and was just generally incredibly supportive,” he said. Spiers plans to continue collaborating with Kuchenbecker on future research projects.

At MPI-IS, Yasemin Vardar’s research focused on gaining a better understanding of human tactile sensation with the aim of creating new haptic interfaces that enable users to interact with virtual environments. For example, much of her research explores ways that future phones and tablets could provide users with a broad range of realistic and controllable haptic experiences.

Vardar came to MPI-IS in 2018 after completing her PhD at Koç University in Turkey. She credits Katherine’s mentorship with gaining the confidence to apply for faculty positions outside her home country. “Finding an academic job is not easy. Before coming to MPI-IS, I never really entertained the idea that I could build an academic career outside of Turkey. But right from the first year, Katherine encouraged me to think about what I wanted and to develop my vision. She guides you just enough that you can figure it out yourself, and then you just go for it.”

On September 1, Vardar will begin the next stage of her career as an Assistant Professor in the Cognitive Robotics Department at Delft University of Technology in the Netherlands.