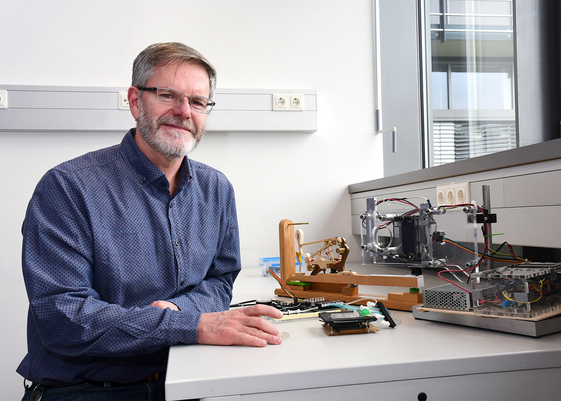 The award will allow the visiting professor in the Haptic Intelligence Department at the Max Planck Institute for Intelligent Systems in Stuttgart to extend his stay in Germany.

Brent Gillespie, currently a visiting professor in the Haptic Intelligence Department at the Max Planck Institute for Intelligent Systems (MPI-IS) in Stuttgart, has been awarded a Humboldt Research Award that will allow him to extend his stay in Germany.

Gillespie is a Professor of Mechanical Engineering at the University of Michigan in Ann Arbor in the USA, and he has been on sabbatical in the Haptic Intelligence Department at the MPI-IS since July 2017. Support from his home university and funding from the department he is visiting covered the first twelve months of his sabbatical. “But with the Humboldt Research Award, Brent can stay on another six months to continue his research”, says Dr. Katherine J. Kuchenbecker, who heads the Haptic Intelligence Department and nominated Gillespie for the award. “The timing of Brent’s sabbatical is particularly fortuitous, as I am in the process of building up my new department here in Stuttgart. There are currently no other faculty or senior scientists in the field of haptics or human-machine interaction here. Having Brent to chat with and join in my group meetings greatly improves the intellectual environment for both me and my team. His presence here will have a lasting positive impact on the direction of my research for years to come.”

“It is an exciting time to be working in the area of human-automation and human-robot collaboration“, says Gillespie. “The invitation to work with colleagues in Germany is quite an honor. I hope to function as a conduit for exchange of ideas and approaches on these topics.”

Gillespie has established a strong international reputation in the field of human-machine interaction. His research centers on automation technology, control systems, robotics, and mechatronics. He builds machines intended to extend the human body, like powered exoskeletons or prostheses that function to rehabilitate or replace lost motor function for persons with neurological injury and instruments for musical expression that extend motor functions for healthy persons. He also studies semi-automated vehicles and collaborative robots.

The Humboldt Foundation grants up to 100 Humboldt Research Awards annually, regardless of the researcher’s discipline or nationality. When making its selection, the foundation takes into account the nominee’s achievements to date, looking for fundamental discoveries as well as new theories and insights that have had a significant impact on the researcher’s own discipline. The Foundation also looks to the future and considers the prospective cutting-edge achievements of the awardee. Once selected, award winners are invited to spend a period of up to one year cooperating on a long-term research project with specialist colleagues at a research institution in Germany. Brent Gillespie’s host is the Max Planck Institute for Intelligent Systems, one of the 84 Max Planck Institutes that are part of the Max Planck Society – Germany's most successful research organization conducting basic research in many disciplines.

Brent Gillespie received a Bachelor of Science in Mechanical Engineering from the University of California Davis in 1986, a Master of Music from the San Francisco Conservatory of Music in 1989, and a Masters and Ph.D. in Mechanical Engineering from Stanford University in 1994 and 1996. Gillespie’s awards include the Popular Science Invention Award (2016), the University of Michigan Provost’s Teaching Innovation Prize (2012), and the Presidential Early Career Award for Scientists and Engineers (2001).