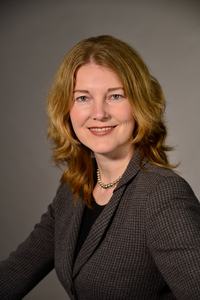 Our scientific understanding of haptic interaction is still evolving, both because what you feel greatly depends on how you move, and because engineered sensors, actuators, and algorithms typically struggle to match human capabilities. Consequently, few computer and machine interfaces provide the human operator with high-fidelity touch feedback or carefully analyze the physical signals generated during haptic interactions, limiting their usability. The crucial role of the sense of touch is also deeply appreciated by researchers working to create autonomous robots that can competently manipulate everyday objects and safely interact with humans in unstructured environments.

My team works in all of these related areas, aiming to sharpen our understanding of haptic interaction while simultaneously inventing helpful human-computer, human-machine, and human-robot systems that take advantage of the unique capabilities of the sense of touch. This talk will showcase key examples from our ongoing research, including Haptipedia (www.haptipedia.org), social-physical human-robot interaction for exercise, and large fabric-based tactile sensors that employ electrical resistance tomography. Along the way, I will also share some suggestions on recruiting and leading a diverse team of researchers.

Biography: Katherine J. Kuchenbecker directs the Haptic Intelligence Department at the Max Planck Institute for Intelligent Systems in Stuttgart, Germany. She earned her Ph.D. at Stanford University in 2006, did postdoctoral research at the Johns Hopkins University, and was an engineering professor at the University of Pennsylvania before moving to the Max Planck Society in 2017. She delivered a TEDYouth talk on haptics in 2012 and has been honored with a 2009 NSF CAREER Award, the 2012 IEEE RAS Academic Early Career Award, a 2014 Penn Lindback Award for Distinguished Teaching, and various best paper and best demonstration awards. She co-chaired the Technical Committee on Haptics from 2015 to 2017 and the IEEE Haptics Symposium in 2016 and 2018.