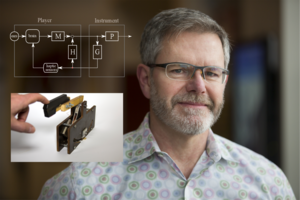 Relative to most robots and other machines, the human body is soft, its actuators compliant, and its control quite forgiving. But having a body that bends under load seems like a bad set-up for motor dexterity: the brain is faced with controlling more rather than fewer degrees of freedom. Undeniably, though, the soft body approach leads to superior solutions. Robots are putzes by comparison! While de-putzifying robots (perhaps by making them softer) is an endeavor I will discuss to some degree, in this talk I will focus on the design of robots intended to work cooperatively with humans, using physical interaction and haptic feedback in the axis of control. I will propose a backdrivable robot with forgiving control as a teammate for humans, with the aim of meeting pressing needs in rehabilitation robotics and semi-autonomous driving. In short, my lab is working to create alternatives to the domineering robot who wants complete control. Giving up complete control leads to “slacking” and loss of therapeutic benefit in rehabilitation and loss of vigilance and potential for disaster in driving. Cooperative or shared control is premised on the idea that two heads, especially two heads with complementary capabilities, are better than one. But the two heads must agree on a goal and a motor plan. How can one agent read the motor intent of another using only physical interaction signals? A few old-school control principles from biology and engineering to the rescue! One key is provided by von Holst and Mittelsteadt’s famous Reafference Principle, published in 1950 to describe how a hierarchically organized neural control system distinguishes what they called reafference from exafference—roughly: expected from unexpected. A second key is provided by Francis and Wonham’s Internal Model Principle, published in in 1976 and considered an enabler for the disk drive industry. If we extend the Reafference Principle with model-based control and use the Internal Model Principle to treat predictable exogenous (exafferent) signals, then we arrive at a theory that I will argue puts us into position to extract motor intent and thereby enable effective control sharing between humans and robots. To support my arguments I will present results from a series of experiments in which we asked human participants to move expected and unexpected loads, to track predictable and unpredictable reference signals, to exercise with self-assist and other-assist, and to share control over a simulated car with an automation system.

Biography: Brent Gillespie is a Professor of Mechanical Engineering at the University of Michigan and a Visiting Professor in the Haptic Intelligence Department at the Max Planck Institute, Stuttgart. He received a Bachelor of Science in Mechanical Engineering from the University of California Davis in 1986, a Master of Music from the San Francisco Conservatory of Music in 1989, and a Ph.D. in Mechanical Engineering from Stanford University in 1996. His research interests include haptic interface, human motor behavior, haptic shared control, and robot-assisted rehabilitation after neurological injury. Prof. Gillespie’s awards include the Popular Science Invention Award (2016), the University of Michigan Provost’s Teaching Innovation Prize (2012), and the Presidential Early Career Award for Scientists and Engineers (2001).