A New Framework to Understanding Biological Vision (IS Colloquium) 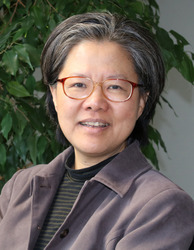 Visual attention selects a tiny amount of information that can be deeply processed by the brain, and gaze shifts bring the selected visual object to fovea, the center of the visual field, for better visual decoding or recognition of the selected objects. Therefore, central and peripheral vision should differ qualitatively in visual decoding, rather than just quantitatively in visual acuity.

Since much of the visual attentional selection is guided by the primary visual cortex V1 (see https://webdav.tuebingen.mpg.de/u/zli/V1Saliency.html for pre-reading materials), the central-peripheral dichotomy should be particularly reflected in neural computation in V1 together with higher visual cortical areas along the visual pathway. I will introduce the recent proposal that the top-down feedback from higher to lower visual areas such as V1 for the computation of analysis-by-synthesis in visual decoding is weaker or absent in the peripheral visual field (https://webdav.tuebingen.mpg.de/u/zli/Central-Peripheral.html). Theoretical predictions and experimental data will be explained in detail.

Biography: I obtained my B.S. in Physics in 1984 from Fudan University, Shanghai, and Ph.D. in Physics in 1989 from California Institute of Technology. I was a postdoctoral researcher in Fermi National Laboratory in Batavia, Illinois USA, Institute for Advanced Study in Princeton New Jersey, USA, and Rockefeller University in New York USA. I have been a faculty member in Computer Science in Hong Kong University of Science and Technology, and was a visiting scientist at various academic institutions. In 1998, my colleagues and I co-founded the Gatsby Computational Neuroscience Unit in University College London. From Oct. 2018, I am a professor in University of Tuebingen and the head of the Department of Sensory and Sensorimotor Systems at the Max Planck Institute for Biological Cybernetics in Tuebingen, Germany. My research experience throughout the years ranges from areas in high energy physics to neurophysiology and marine biology, with most experience in understanding the brain functions in vision, olfaction, and in nonlinear neural dynamics. In late 90s and early 2000s, I proposed a theory (which is being extensively tested) that the primary visual cortex in the primate brain creates a saliency map to automatically attract visual attention to salient visual locations. This theory, and the supporting experimental evidence, have led me to propose a new framework for understanding vision. I am the author of Understanding Vision: theory, models, and data, Oxford University Press, 2014.